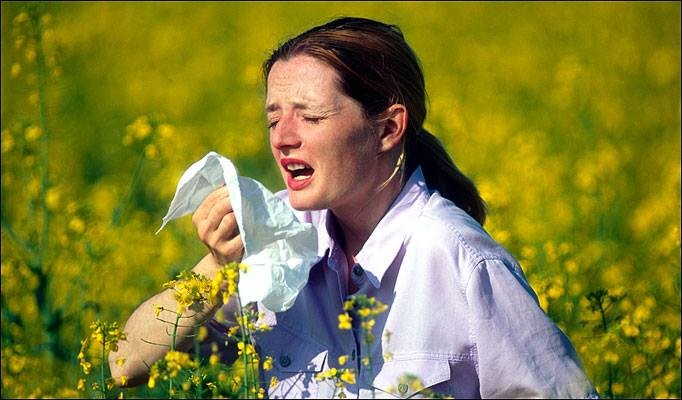 Hay fever affects up to 30% of all people worldwide. Symptoms frequently include nasal congestion, a clear runny nose, sneezing, nose and eye itching, and excess tear production in the eyes. Grass pollen is spread by the wind and as it is inhaled, it lodges in the nasal lining tissues and initiates the allergic response.

Many patients respond to antihistamines. The first-generation antihistamines, such as chlorpheniramine (Piriton) frequently cause mouth dryness and sleepiness as side effects. Newer, so-called "non-sedating" or second-generation antihistamines are also available. These include loratadine (Clarityn) and cetirizine (Zirtek or Cetrine). In general, this group of antihistamines is slightly more expensive, has a slower onset of action, is longer acting, and induces less sleepiness. Decongestants help control allergy symptoms but not their causes. Decongestants shrink the swollen membranes in the nose and make it easier to breathe. Decongestants can be taken orally (Sudafed or Actifed) or by nasal spray (Sudafed).

Decongestant nasal sprays should not be used for more than seven days without a doctor's advice. They can often cause a "rebound effect" if taken for too long. Cortisone nasal sprays such as Fluticasone (Flixonase) and Beclomethasone (Beconase) are typically the first-line medication for patients suffering from persistent allergies and are very effective in reducing the inflammation which causes swelling, sneezing, and a runny nose. The new Prevalin allergy plus nasal spray forms a thixotropic barrier gel in nose to physically block allergens and Reduces sensitivity to pollen over time.

Create a barrier: Smear Vaseline inside your nostrils. This acts as a filter for the pollen.

Time it right: Don’t sit outside between 4 pm and 7 pm or in the early morning, as the pollen count is highest at these times Shut the windows: Don’t sleep or drive with the windows open, as this will allow pollen to come in.

Damp dust regularly: Dusting with a wet cloth, rather than a dry one, will collect the dust and stop any pollen from being spread around.

Wash your hair at bedtime: Pollen is sticky and may be in your hair. It can then transfer to your pillow when you go to bed and will affect you during the night.

Vacuum: Pollen can live in the carpet for up to three months so vacuuming is important

Check including advice on Diet and lifestyle

On street parking available. Payable from 10am to 4pm. FREE after 4 p.m., before 10am and all day on weekends.

We pay your parking for 30 mins when you make a purchase in our pharmacy.

Monday to Friday: 9am to 7pm

Saturday: 9am to 6pm